There are many different kinds of stone.
Some lie on the ground, unnoticed.
Others become an object of prayer and are respected.

Stone has been formed in the workings of the Earth for as long as 4.6 billion years.
Individuals stones are pieces of the Earth in a sense, and people have reflected their feelings in stone from ancient times.

Some stones become monuments with letters engraved on them,
and others become Jizo statues, the guardian deity of children, watching over people at the side of a road. Huge stones become objects of prayer,
and others still become gravestones to be valued as a symbol of one’s ancestors.

As such, stone passes on people’s feelings to future generations.
We hope that you will entrust stone with the feelings you had when you received your goshuin.

A goshuincho is a notebook for collecting goshuin, the stamp for a shrine or temple along with the name and the date of the visit as proof of the pilgrimage. Cocoronagu is a completed craftwork as a result of the skills of a number of craftsmen who mastered traditional techniques in Kyoto. 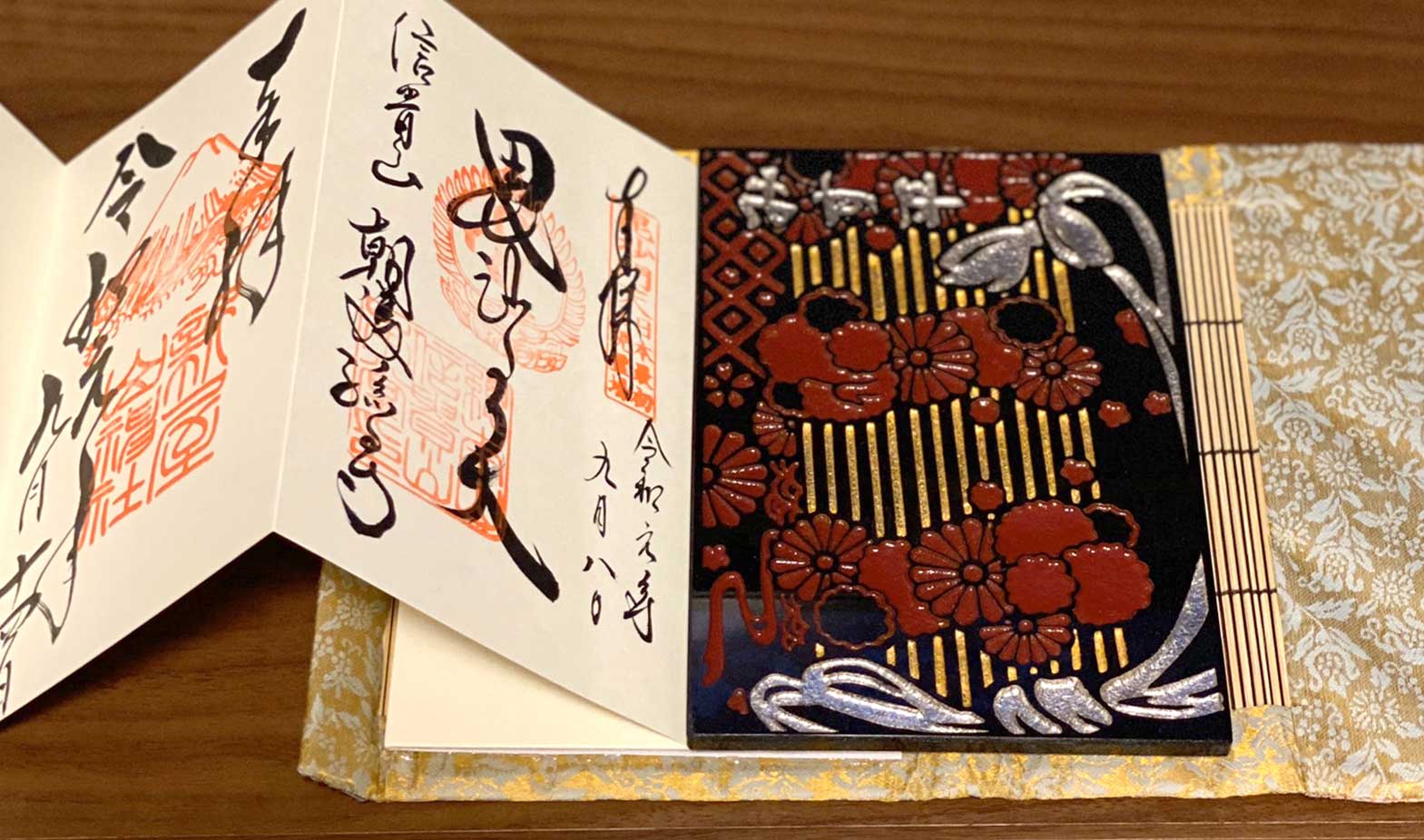 Cocoronagu, stone goshuincho, has a cover made of thin sliced stone. You can reflect your feelings and thoughts by engraving letters and designs on the cover. The paper used for this notebook is torinokogami, one of the finest types of traditional Japanese paper, which is characterized by a smooth, glossy surface.

Goshuin is the representation of the deities and Buddha enshrined in shrines and temples. Goshuincho is a notebook used to record the relationship born between those deities, Buddha and you. Leave a record of the pure feelings you had when you visited a shrine or temple in Cocoronagu. Your feelings will surely be passed on to your family and friends.

Stone varies greatly. Each stone has its own pattern and color shade.

◎ Our product can be purchased online.
◎ The actual product appearance may differ from the images.
◎ The materials used may differ depending on the season.

Ajiishi, one of the top-quality types of stone produced in Japan, is also available.

You can purchase an exclusive goshuincho in whatever size or design you like.

Choose the type of stone and specify the size.

As the appearance of stone differs depending on its origin, color and quality, and the price also varies, we offer several typical types of stone from Japan and abroad. We also offer a service to cut the stone according to your preference. Please specify your desired size. 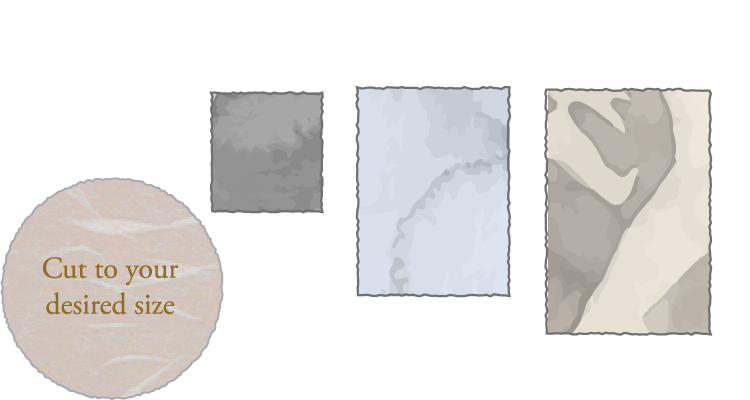 Two colors of white and ecru (light beige) are available. Echizen Washi produced in Fukui Prefecture, a type of traditional Japanese paper, is folded in a bellows shape into 24 pages, and goshuin can be collected on both sides. 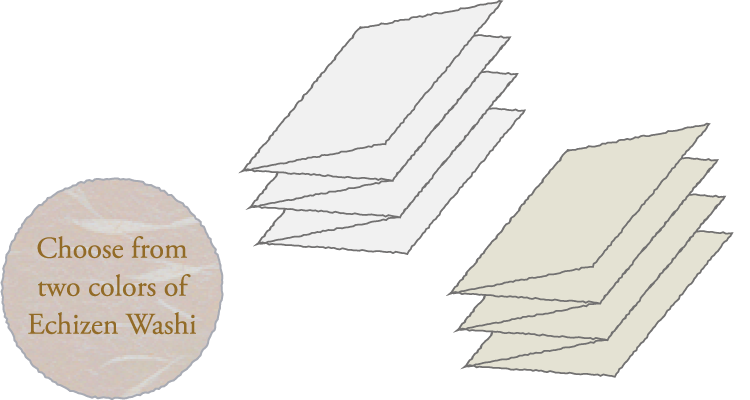 Letters and symbols such as a family crest or name can be engraved, colored and foil stamped. Please feel free to contact us about the design. Customized goshuincho can be displayed as an interior decoration. 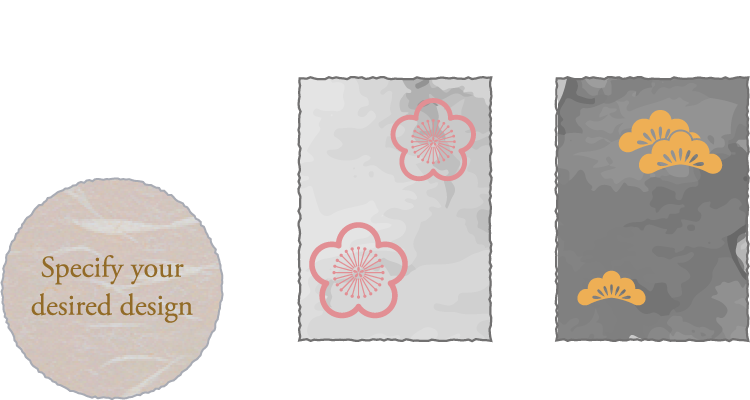 The skills of traditional craftsmen that have been handed down from generation to generation provide a nice touch to the stones. 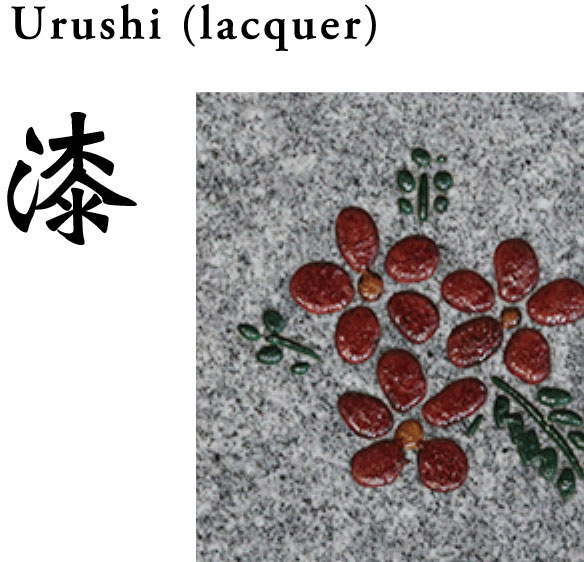 Urushi is a traditional plant-derived dye found in East and Southeast Asia. After making a color by kneading urushi with pigments, we paint it on the stone. Then, it is dried in a room with high humidity. 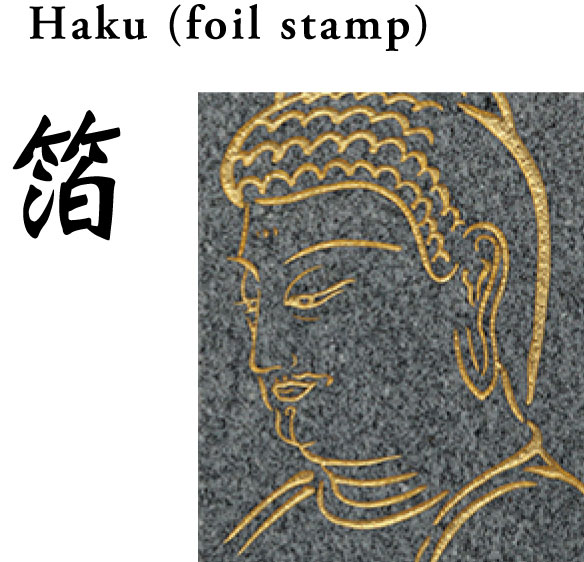 Decoration on the stone cover is available with haku, which is made of metal extruded to a very thin layer. Urushi is used as an adhesive. Gold, platinum and silver can be used as hakumaterials.
Even fine and delicate patterns can be reproduced. 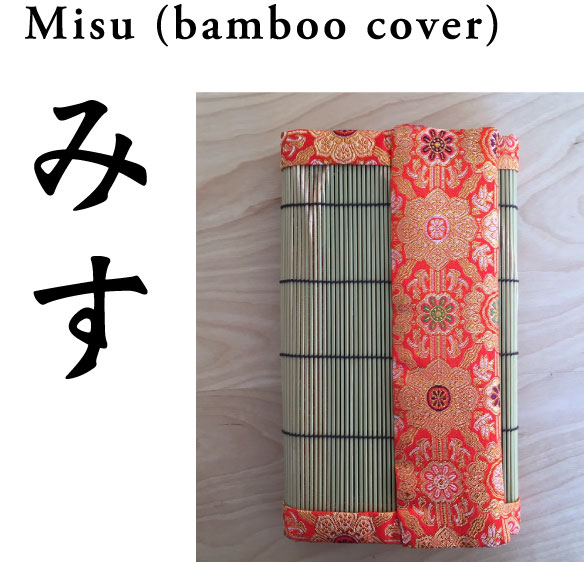 A special cover to protect goshuincho is also available, using misu for the main body.
Misu is made of slats of madake bamboo woven together with yarn. It is traditionally used as a blind in Japan. We use suiren, one of the best quality materials of misu, for our special cover.
Fabric is sewn around the circumference of its main body.

To keep tradition alive and make use of it in modern times.
Craftsmen in Kyoto will create products carefully and finely.

Works on stone crafts such as gravestones, lanterns, water bowls and other creations, focusing on the value of our predecessors’ passion toward stone and related processing skills.

Engaged in lacquering a number of Buddhist alter fittings and main halls in temples.
Expanding his activities, utilizing the skills that he has cultivated.

Established Gold Leaf Art Hanazawa Ltd. in 1999, taking over Kinpaku-oshi-Hanazawa established by his father.
Engaged in processing gold leaf for Buddhist alters and their fittings, in addition to Shinto ritual articles.

A specialty workshop for suiren (i.e., misu, meaning bamboo blind in Japanese) founded in the early Kansei era (1789-1801). Its craftsmen have produced suiren for the Kyoto Imperial Palace up to the present day. They still produce suiren according to ancient traditions, utilizing the technique called yae-ami, meaning eightfold knitting in Japanese, with bamboo strips assembled and knitted together.

Ishikawasekizai is a long-established stonemason
located in Nishijin, Kyoto
since 1921 (Taisho 10).

We can refer various sects of temples and cemeteries to you.

Please feel free to contact us for any inquiries.

We handle not only gravestones,
but also stone products including traditional crafts
such as lanterns, water bowls and other creations,
as well as stone accessories.

Led by representative Hiroyasu Ishikawa,
we strive to offer good products to our customers with our motto of “Always be grateful.”

By train
From Kyoto Station: Take Kyoto City Bus #9 to Horikawa-Teranouchi bus stop, and walk to the west for 5 minutes.
By car
Drive from Kyoto Station along Horikawa-dori to the north for 20 minutes. Please contact us for detailed directions.
* Private parking available.
* Please note that the road in front of our shop is one-way heading east for vehicles.